The building block approach does not define and operationalize “culture” as an analytic concept. Instead we view it as a CCC that must be specified in behavioral terms that translate easily across populations and between personal and subpersonal levels. In this entry we discuss two examples from existing literature where this is done, one from cognitive anthropology, the other from evolutionary psychology.

In light of the widespread criticism of “culture” as an analytical concept within anthropology, Roepstorff, Niewöhner, and Beck (2010) offer a more specific behavioral redescription of culture as “patterned practice” that is well suited to the BBA. At the human level, “patterned practice” refers to behaviors that order everyday life and generate more or less stable regularities “that are specific to particular types of situations, defining preferences, predispositions, and expectations for actors” (p. 1051).

This redescription works well across levels of analysis, since as Roepstorff, Niewöhner, and Beck (2010, 1052) observe: “Patterns of practice at the level of social interaction correlate in relevant ways with neural and psychophysical patterns, and in the same way that social practice forms patterns, large-scale brain signals as well as other psychophysical signals generated during particular task performances can be analyzed to expose significant patterning.” This leads them to recommend that researchers who want to work between levels “employ social patterns of practice instead of an abstract notion of culture to inform experimental design and participant recruitment” (p. 1052).

Repeated practices in everyday life constitute a key factor in the calibration or fine-tuning of the human cognitive system. In a sense, this is simply to recognize that the environment “evokes” psychological responses. In selecting and activating domain-specific mechanisms, the cognitive system is calibrated by human actions and cultural, human-made, products. The concept of patterned practice focuses on this recursive relationship between humans and their natural and constructed environments. Here is how Roepstorff, Niewöhner and Beck summarize the research program:

The concept of patterned practice groups people by establishing through empirical work that participants interact, thereby actualizing concrete, shared material-discursive environments. This takes up the basic insight that any action is embedded in three heuristically different “environments” – normative orders, social dynamics and material conditions where actors are confronted with the challenge to interactively with others interpret, understand, and strategize in concrete situations to solve practical problems. The concept of patterned practices in domain-specific material-discursive environments stresses that actors participate in particular ways of doing things in these joint activities, for example praying regularly in particular ways or spending hours listening to and producing music. A patterned practice approach assumes that regular, patterned activities shape the human mind and body through embodiment, and internalization. Vice versa, enacting practices shape and re-shape norms, processes, institutions, and forms of sociality. Culture gets under the skin and skull, if you will, and it is remade gradually through collective instances of actualization (Roepstorff, Niewöhner and Beck 2010: 1051-1052).

From the perspective of the building block approach, the notion of culture as patterned practice allows us to analyze how the building blocks are put together and calibrated to form specific “practice paths”. In BBA terminology, this means that patterns of practice are crucial to the study of what we call formations. Since it is precisely this constructive element that the BBA seeks to understand – as opposed to simply taking things apart and studying the individual pieces, which is the job of psychologists and cognitive scientists – detailed descriptions of how patterns of practice come together in specific formations, and analysis of how they build on top of discernable features of human mental architecture is essential.

Another example of a broad definition of culture in behavioral terms is found in evolutionary psychology (Tooby and Cosmides 1992). On this view, “culture” includes:

Instead of limiting “culture” to “cultural contingency,” “uniqueness,” or “difference,” this view includes a focus on broadly shared, biologically grounded features of human behavior. For example, the practice of chewing food before swallowing it is as much a part of “culture” on this understanding (behavior shared across the species) as is the practice of “playing music” or “speaking a language.”

This evolutionary understanding of “culture” as shared behaviors is useful for the BBA because it points out that there are a number of different explanations available for why commonalities exist. This takes us from the personal (observable behaviors) to the subpersonal (psychological and biological explanations). Tooby and Cosmides break down their concept of culture into three subtypes, based on different causal explanations: Metaculture, transmitted (or epidemiological) culture, and evoked culture. While anthropologists have typically focused on the second of these types, an evolutionary informed view forces us to consider the other two as well.

Metaculture is the most basic and most universally shared sense of “culture.” It comprises

universally recurring relationships established and constituted by (1) our universal evolved species-typical psychological and physiological architectures, (2) the interaction of these architectures with each other in populations, (3) their interaction with developmentally relevant recurrent structures of human natural and cultural environments, and (4) their patterned standard impact on human phenomena (p. 91).

The activity of chewing is an example of a metacultural practice that is shared not only species-wide, but with other animals as well. Such shared behavior, however, also makes nuanced cultural variations possible: For example, different codes of politeness for chewing – with mouth open or with mouth closed – will be part of transmitted culture within specific groups. Varieties of practice, which are used to create in- and out-groups, define social distinctions, identity and class, are typically built on top of a shared “metaculture” grounded in evolutionary history. In BBA language, the elements of what Tooby and Cosmides call “metaculture” may be analyzed as building blocks on a subpersonal level.

The notion of transmitted or epidemiological culture denotes behaviors that are transmitted from one individual to another through processes of socialization and learning, and which can be highly specific to a given social group. However, the frequently used term “transmission” is misleading: socialization and learning are not simply about the “transfer” of items such as ideas, practices, beliefs, aesthetical tastes, courtesy rules, or ethical norms from one individual to another. This is because, on a cognitive and evolutionary view, human minds are not “blank slates” that can easily be inscribed with any kind of content. The existence of hard-wired cognitive modules for processing domain-specific information in specialized ways means that the teaching/learning relationship is heavily constrained by the cognitive architecture of the learner. In other words: there are cognitive constraints on what can be learned, how it can be learned, and what distortions will naturally tend to happen in the learning process.

The study of how the cognitive apparatus constrains the variety of cultural representations that are distributed in a population is what Dan Sperber (1996) has called the “epidemiology of representations.” In contrast with the transmission theories, the focus is shifted from the sender to the receiver:

an evolutionary psychological perspective emphasizes the primacy of the psychological mechanisms in the learner that, given observations in the social world, inferentially reconstructs some of representations existing in the minds of the observed. Other people are usually just going about their business as they are observed, and are not necessarily intentionally “transmitting” anything. (p. 118). 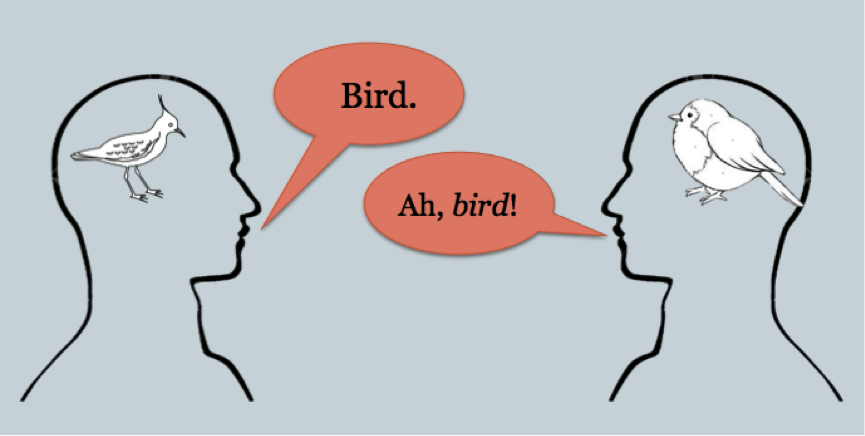 Transmission of mental representations is a source of cultural variation. (Image: Egil Asprem)

For this reason, the transmission process is itself a powerful source of behavioral variations. Since the cognitive constraints on inferences are broadly shared across the human species, it is also a source of new, emergent patterns: similar kinds of distortions will tend to happen across the human population. These constraints, such as the domain-specific modules studied by evolutionary cognitive psychology, are other examples of what we call the building blocks of human experience.

On the evolutionary view, behavioral differentiation may also be evoked by environmental constraints. Economic attitudes are a classic example of an evoked aspect of culture, seeing that what seems appealing and beneficial to individuals varies based on external conditions. As Tooby and Cosmides write,

when members of a group face new and challenging circumstances (drought, war, migration, abundance), this may activate a commons et of functionally organized domain-specific mechanisms, evoking a new set of attitutdes and goals. The newly evoked psychological states will make certain new ideas appealing, causing them to spread by transmission, and certain old ideas unappealing, causing them to be discarded. (Tooby & Cosmides 1992: 116)

This, however, is not to say that the external stimulus causes a specific pattern of behavior to emerge. Instead, the claim of evolutionary psychology is that humans come equipped with a set of alternative, functionally organized, domain-specific mental mechanisms (for example, about “fairness” in the distribution of resources), which can be differentially activated in response to environmental changes. In a situation of scarcity, it intuitively seems fair to share equally. In situations of abundance, the notion of fairness may shift toward an emphasis on “fair” competition for resources. In other words, the environment is a variable for determining what set of subpersonal building blocks shared behaviors are likely to spring from.

How to cite this entry.