The building block approach rests on an influential current in recent philosophy of science known as “the new mechanical philosophy”, or “the new mechanism” (see Craver and Tabery 2015). In this framework, a mechanism explains the behavior of a phenomenon in terms of the interaction of parts, also referred to as components or building blocks. Thus, “[a] mechanism for a phenomenon consists of entities (or parts) whose activities and interactions are organized in such a way that they produce the phenomenon” (Glennan 2015). The following illustration shows the relationship between the phenomenon as a behavior (system S engaging in behavior ψ), the mechanism as an explanation of how the components (X1, X2, X3, X4, each engaging in their own behavior ϕ1, ϕ2, ϕ3, ϕ4) are interacting (arrows) to produce the behavior of interest: 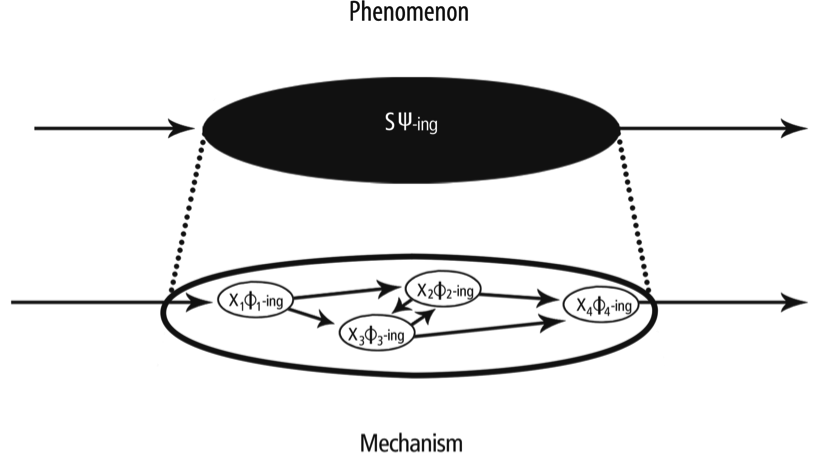 The new mechanists speak of mechanisms that do a number of different things; notably, a mechanism can produce a phenomenon, or it can maintain it. The figure above is of a mechanism that produces an output – a specific behavior – through a specific causal sequence. But we can also model mechanisms that maintain a self-contained system, such as the body’s homeostasis. (9-10)

Mechanisms are nested within mechanisms to generate multilevel mechanisms. As Craver and Tabery write,

[f]rom a mechanistic perspective, levels are not monolithic divides in the furniture of the universe … . Rather, levels of mechanisms are defined locally within multilevel mechanisms: one item is at a lower level of mechanisms than another when the first item is a part of the second and when the first item is organized (spatially, temporally, and actively) with the other components such that together they realize the second item. (2015: 20).

If system S is an institution – say, a bank – the mechanism that explains its behavior includes a vast set of different components, including the various corporate roles (e.g., CEO, board of directors, financial analysts, clerks, stock holders) that specify the behaviors of the individual persons who hold these roles, the material infrastructure that supports the bank (e.g., vaults, internet servers, office buildings), the social relationships between staff, customers, and investors, and even the financial laws and regulations of the bank’s political environment. The mechanistic explanation of the bank’s behavior specifies how these components interact to produce the behavior. Each of the components, however, can be taken as the phenomenon of interest, comprised of its own set of components that interact to produce its behavior. The behavior of the CEO, for example, may be explained mechanistically by a host of interacting components, including her training, previous experience, personal motivations, relationships, cognitive abilities, and personality type. The mechanism that explains the behavior of the CEO is nested within and, thus, at a lower level than the mechanism that explains the behavior of the bank.

How to cite this entry.